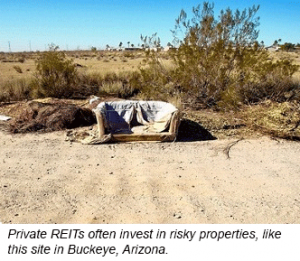 A REIT is a real estate investment trust that owns income producing real estate. There are REITs which trade on the conventional national securities exchanges and there are those that are not listed. This latter group, called Non Exchange Traded REITs ( like those from Behringer Harvard, Cole, Hines, Inland, KBS, Wells REITs and others) are currently problematic for many retirees who bought them believing they were safe, dividend-paying investments with little chance for loss of capital. Investors were often convinced to buy these investments believing they would achieve good returns with very limited downside. Unusually high fees and commissions were usually earned by the selling brokers who often could not resist the temptation to generate revenue for himself and his firm, at the expense of the unsuspecting client.

Unfortunately, it is precisely the fact that these trusts are not publicly traded that provides the potential for disaster. If, say, the US real estate market suddenly suffers a steep decline not seen since the Great Depression, as was the case in fall of 2008, values plummet, rents decline and there is no cash for distribution to investors. This can lead to a suspension of dividend payments by the REIT administrators as well as cessation of redemption programs , leaving investors with non-dividend paying, illiquid investments of indeterminable value.

Non-traded REITs are not as regulated as their publicly traded counterparts and can operate with little transparency, further increasing the potential for misconduct and abuse. Investors are often surprised to find they are bound by long and complicated exit clauses when they try to liquidate their holdings.

There are several documented examples of brokerage firms selling these investments to elderly and unsophisticated investors without alerting them about these risks or using downright misleading promotional materials – click HERE to read about FINRA’s action against David Lerner and Associates related to its sale of the Apple Ten REIT. The illiquid nature of non-traded REITs makes them completely unsuitable for elderly and retired clients. Other private REITs that have suspended or cut dividends include Behringer Harvard REIT, Cole REITs, Hines REITs, Inland REITs, Wells REITs, and many more.

Note regarding Value on Non-Traded REITs: Since these investments do not trade on an exchange, valuing the investment is difficult, if not impossible. FINRA requires that the company provide an estimated valuation of the shares within 18 months after cessation of the offering. Investors should be wary that estimated value does not always accurately reflect fair market value; i.e., the amount an investor could expect to receive if the investment were liquidated immediately. The only market for most of these investments is one of the privately operated secondary markets where selling prices are often discounted 30% or more from the estimated value. See this blog article for more information on secondary markets for non-traded REITs. For example, one of the popular non-traded REITs which sold originally for $10 a share currently has an estimated value of about $5. Recent bids received from a few secondary market makers were in the range of $1.90.

For more on a specific non traded REIT, see our blog which is regularly updated.

Individuals who suffered losses from investments in non publicly traded real estate investment trusts can contact attorney Robert H. Rex or Nan Thompson at the law offices of Dickenson, Murphy Rex and Sloan PA. Mr. Rex is dedicated to pursuing claims on behalf of investors and practices exclusively in the field of securities arbitration.

Visit our Securities Law BLOG for the most recent information on SEC and FINRA regulatory actions.

Call Us
Nationwide Representation- Office Locations
Send Us A Message-We’ll Get RIght Back to You
Login to Rex Securities Law
Reset Password
Enter the username or e-mail you used in your profile. A password reset link will be sent to you by email.
Go to mobile version